The design of the Star Wars galaxy -- so often marked by the distinctly used-future feel of cobbled-together freighters and ancient architecture -- posed a challenge for the creators of the Halcyon starcruiser. The high-class cruise ship inside Star Wars: Galactic Starcruiser, now open inside Walt Disney World Resort, called for something more akin to Lando Clarissian’s polished and pristine Millennium Falcon than Han Solo’s hard-used version.

“The design aesthetic actually bridges the prequel era with the original trilogy," says Doug Chiang, vice president and executive creative director at Lucasfilm. “You have a combination of old forms, old materials with sleek materials and sleek forms. It’s very unique in the sense that this is one of the first ships that actually combine those two aesthetics.” 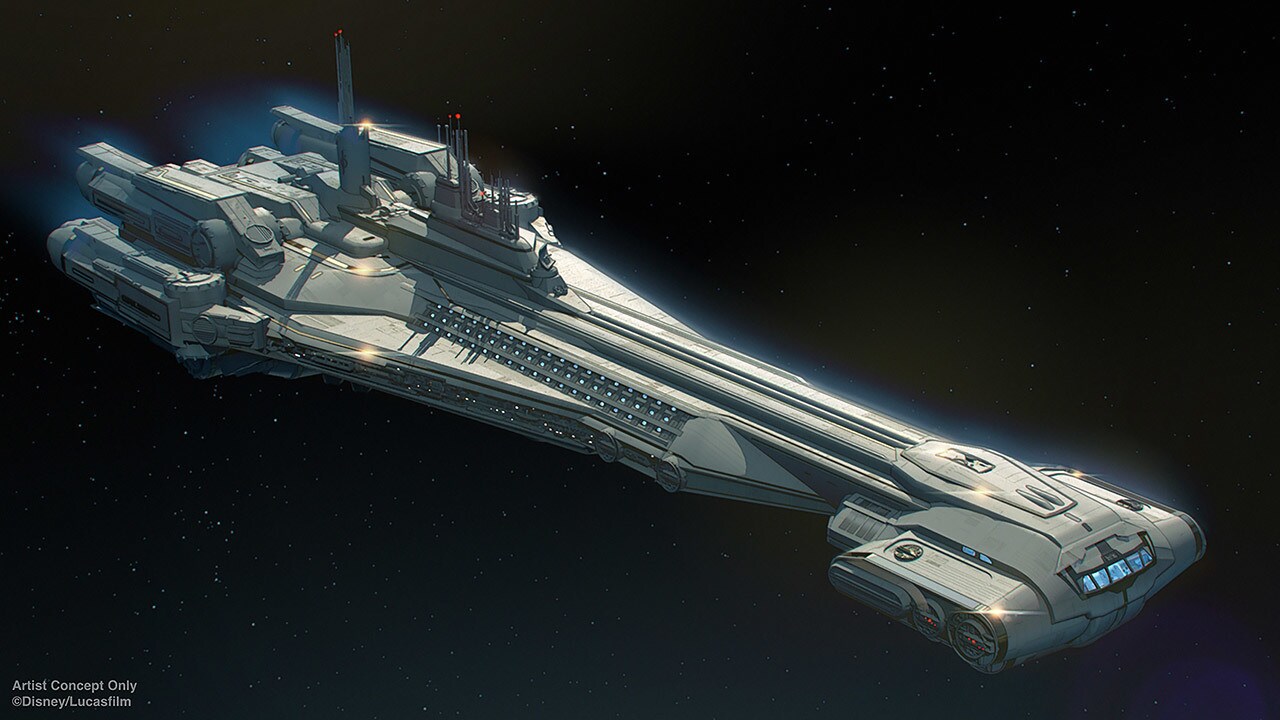 Production designers at Lucasfilm and Walt Disney Imagineering ensured that surface details harked back to the finery of Naboo’s city of Theed, while Queen Amidala’s royal gowns are echoed in the red velvet couches that adorn the Atrium onboard. And nods to Amidala’s vibrant costumes from Star Wars: The Phantom Menace, Leia’s high-fashion-meets-utilitarian Hoth gear from Star Wars: The Empire Strikes Back, and Qi’ra’s sleek accessories that noted her affiliation to Crimson Dawn in Solo: A Star Wars Story, are all on display from the tiling on the floors to the quilting on the bedding. "From the very beginning, we drew inspiration from all across Star Wars lore,” says Ann Morrow Johnson, executive producer and executive creative director for Walt Disney Imagineering. “What does the original ship, the Halcyon starcruiser, want to be? We knew that it wanted to be a legacy ship that felt of the original trilogy, so we decided that it was going to be a Corellian-made ship, like the Tantive IV with actually a fairly similar silhouette.”

“It's really combining different materials to create a new class of vehicles for Star Wars,” Chiang adds. However, while the concepting phase was similar to creating new ships and locations for any Star Wars film production, the construction of a project of this scope was its own challenge. “One of the biggest challenges in designing the starcruiser was that this is a real environment,” says Chiang. “Aesthetically it's the same [as a live-action production]. The big difference is in the execution. It has to be spot on because it has to be real.” A film set can trick the eye, but with the passengers unleashed on self-guided tours of the space over two days, designers had to consider elements that would normally be left unfinished or added in post-production. "In the fabrication of a movie set, it's painted plywood and there's nothing in the back,” Chiang says. “In the starcruiser, we actually had to make it so that it actually functioned. The buttons actually work. When the guests open a door, it is still in story so the suspension of disbelief is never broken. And that created a really deep level of design and thoroughness of construction.” 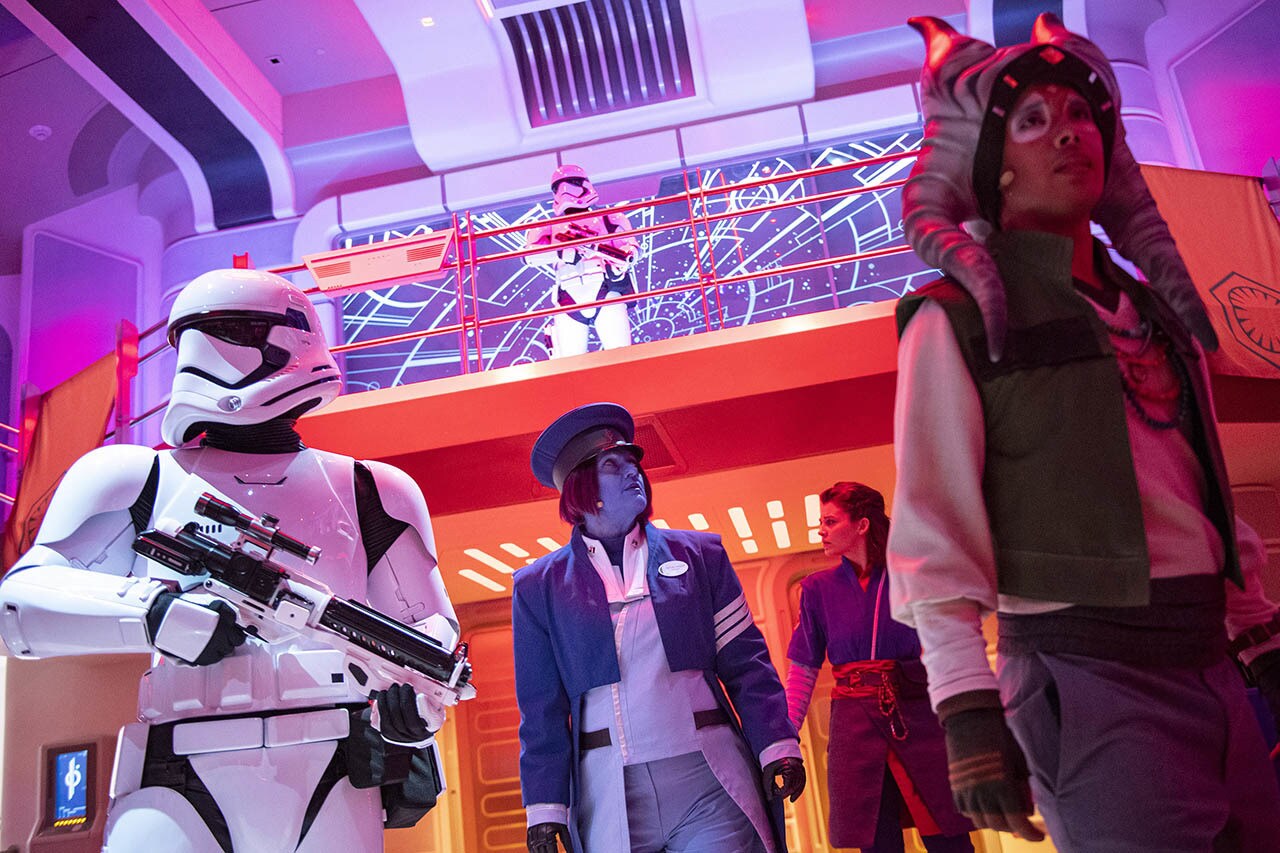 Senior interior designer Bryce Schulte, of Walt Disney Imagineering, led the teams of designers, from production to graphics and even the culinary crew, to ensure there was a visual through-line expressed in everything from the ship’s interiors to the plating at dinner. The first challenge was in defying the expectations of the rough-hewn Star Wars galaxy fans know and love from the original trilogy and Star Wars: Galaxy’s Edge, inside Walt Disney World and Disneyland resorts. “They think of this sort of wild, wild west version of Star Wars,” Schulte says. "So we brought something completely different. We sort of flipped that on its head.”

Each decision was made with the existing stories in mind, beginning with the research into the well-established shape language to form the basis of everything being built into Galactic Starcruiser. Among his inspirations, Schulte paid special attention to Dryden Vos’ yacht, First Light, for its luxurious interiors seen in Solo: A Star Wars Story, as well as the well-appointed Coruscant apartments and Naboo retreat of Senator Amidala in Star Wars: Attack of the Clones and Star Wars: Revenge of the Sith. And, of course, the casinos of Canto Bight, where the upperclass goes to play in Star Wars: The Last Jedi. For an experience that invites fans to step into Star Wars, the glittering city of Canto Bight was the closest touchpoint for passengers to become “a part of that echelon,” Schulte says. “It was fun to pull references from that, but still make the Halcyon starcruiser feel like its own.” 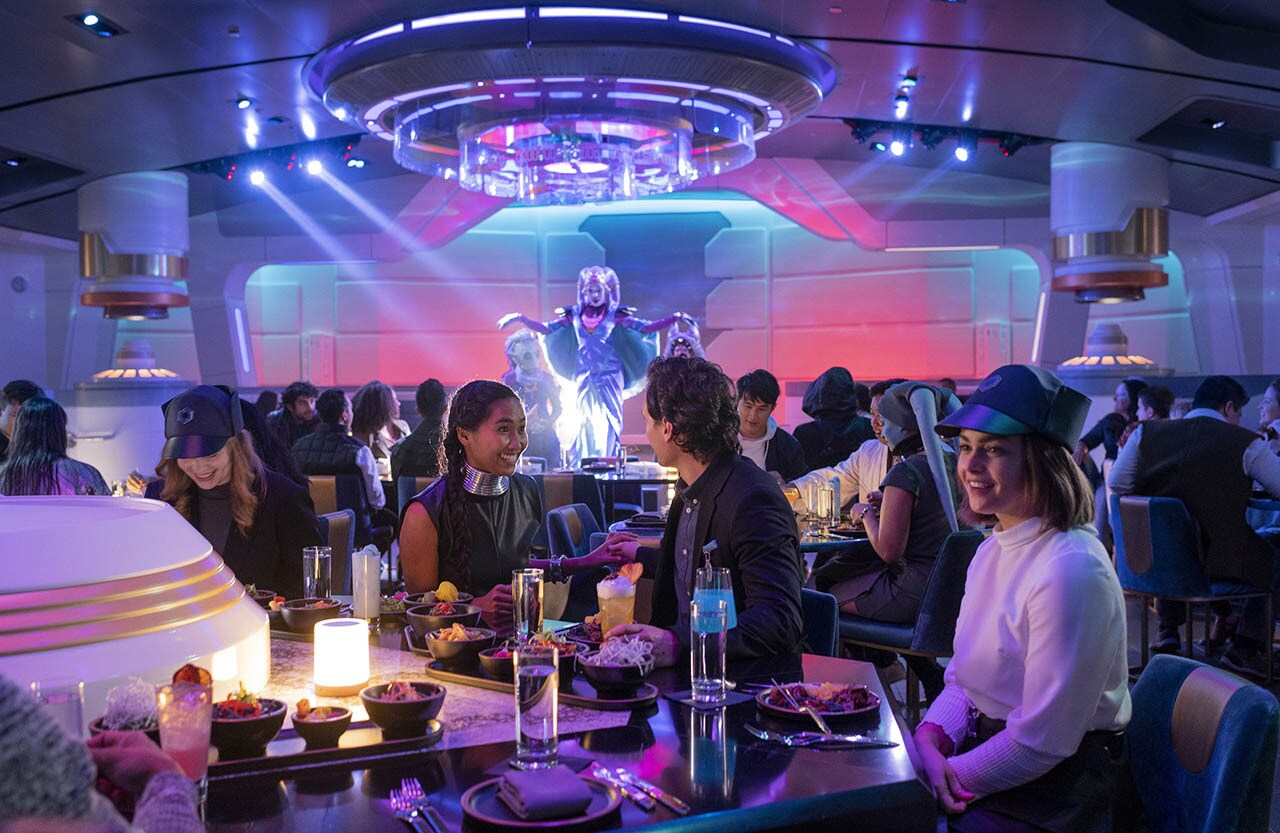 In the grand tradition of Star Wars ships participating as veritable characters in their own right, each room on the Halcyon starcruiser has its own personality and design details that accentuate the immersive experience as the story unfolds around passengers. In the Crown of Corellia Dining Room, for example, at first glance the circular chandeliers seem like an appropriately majestic accent piece. But watch closely and the coloration shifts with the mood, “a call and response in the space,” Schulte says. “There's almost a kinetic reaction in those chandeliers. We wanted to make the ship feel alive and feel like it was reacting.” 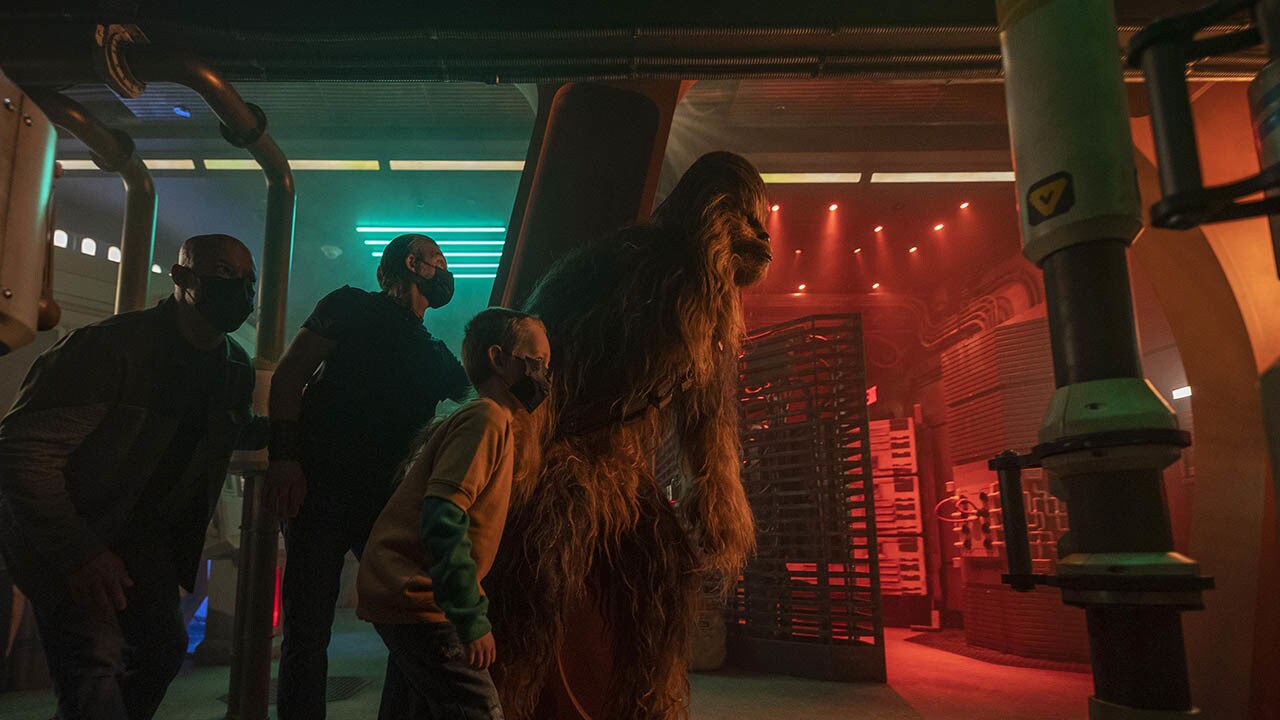 Below deck, the Engineering Room houses the gritty inner workings of the ship, giving the space the most hard-used feel of any spot on the ship. Designers scaled down the space to feel more intimate -- a touch that accentuates Chewbacca’s towering height if you happen to run into the Wookiee while you’re there -- while adding more mechanical and industrial elements, and a garbage chute. “You know, as an interior designer, if you had told me that I was going to look at a production designer and say, ‘Yes, we can put a garbage chute there and more slime. The more slime, the better,’” Schulte says with a laugh, “I probably wouldn't have believed you.”

In the passenger cabins, functionality and comfort were key, from the cozy sleeping pods to the low-profile desk. “We wanted each space to have its own personality,” Schulte says, drawing from existing characters to help inform decor decisions, imbuing the ship with the essence of those icons, with something as standard as the linens — quilted to pay homage to Leia’s Hoth attire — signaling to guests that they weren’t embarking on any ordinary pleasure cruise. And, of course, Chiang himself was an invaluable resource. “There is no better expert on how [Star Wars design] looks and feels,” Schulte says. 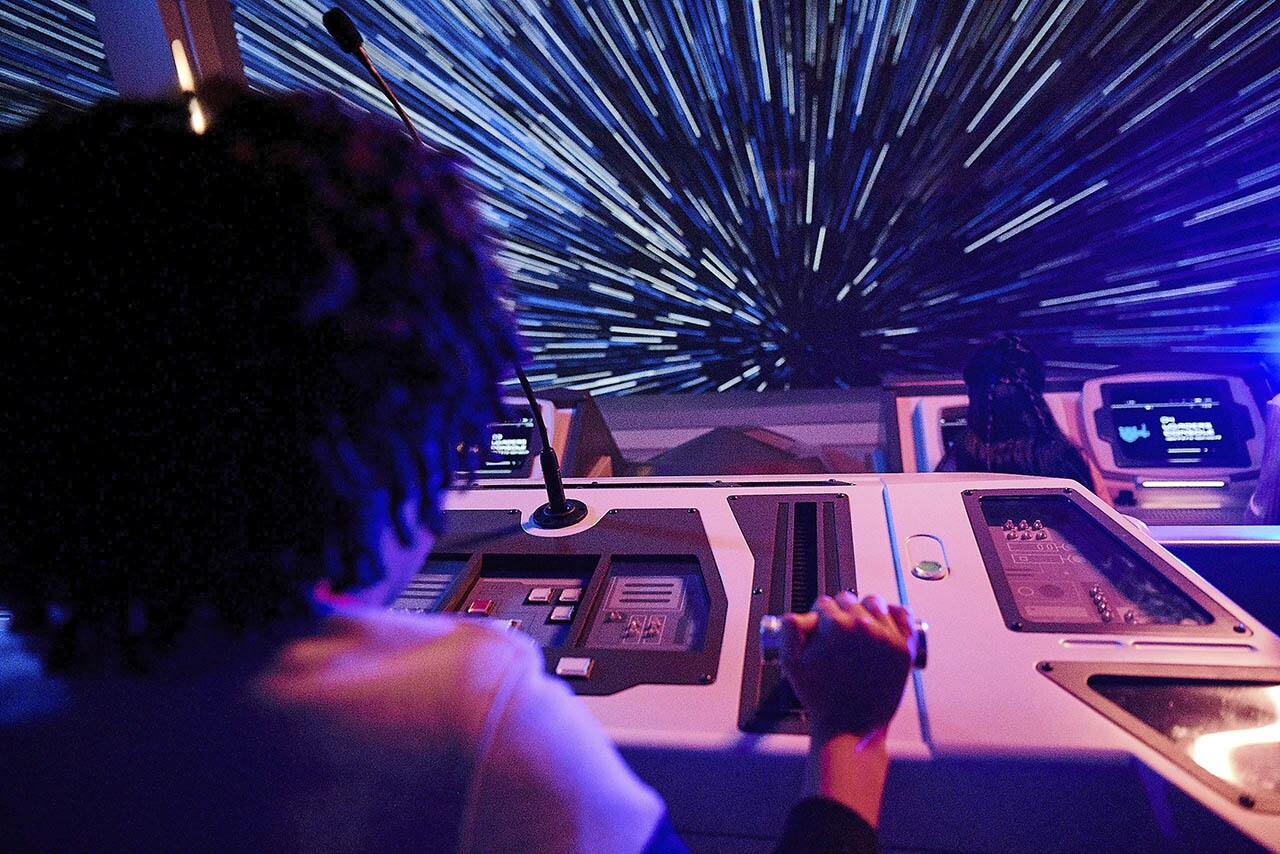 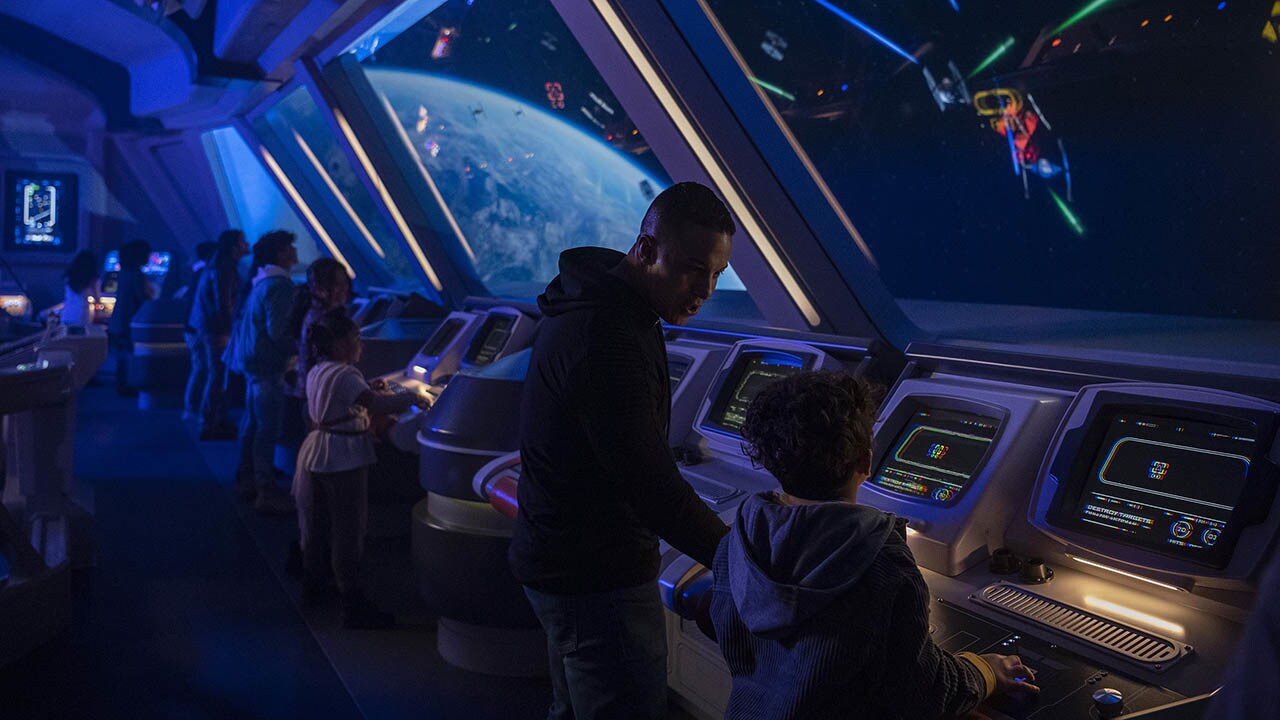 One of Chiang’s favorite challenges was the Halcyon starcruiser's Bridge, a space that’s integral to the storyline as well as the appearance of the ship’s functionality. Adorned with screens that peer out into the vastness of space, if you pause long enough you can actually watch the stars pass by as the ship glides to its next destination. “We knew that we wanted a very impressive Bridge. Part of the whole experience is when you go into the Bridge, you see this vast window, this huge display looking out into space. And the question was, ‘How do you achieve that?’” Chiang asks. In live-action filmmaking, “we can have visual effects outside the windows,” added in post-production or beamed onto screens during filming. “Here we have to actually create a real bridge with a giant projection screen that gave you a vista.” 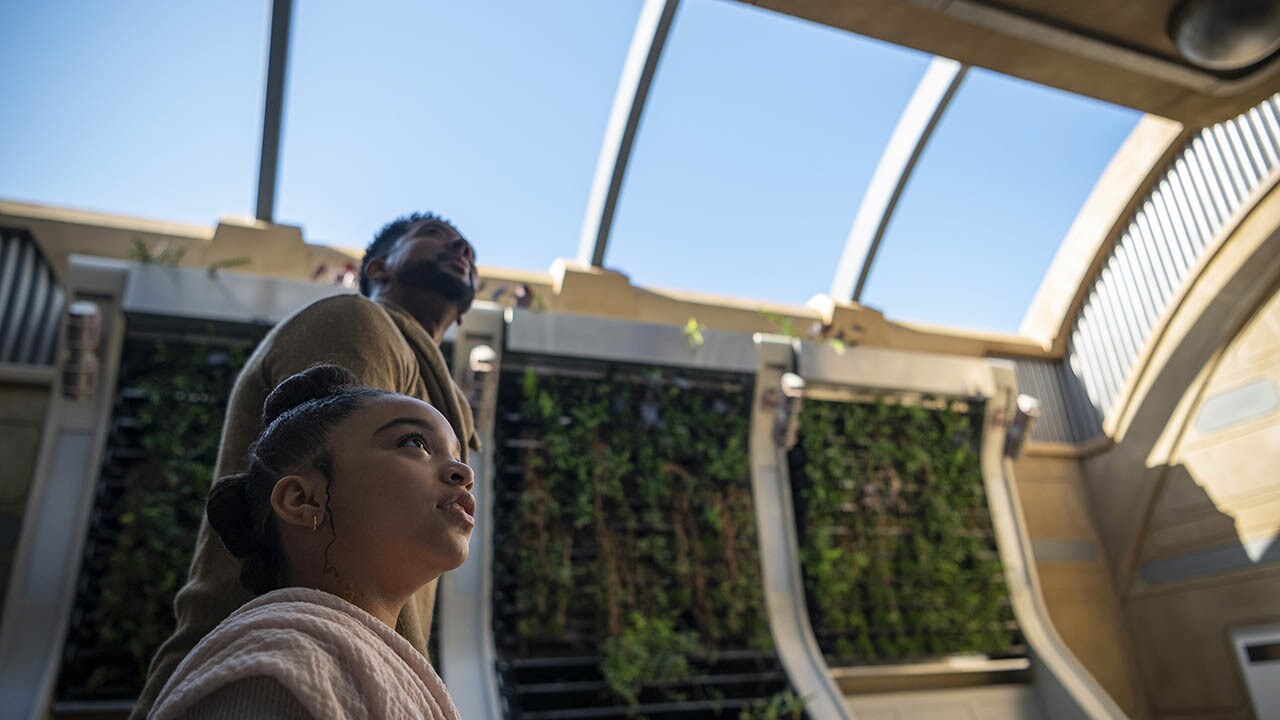 Many of the designers earliest concepts came to fruition in the final construction. “In the initial brief, when we were coming up with the idea, we were developing a lot of blue sky concepts, things that we want to experience,” Chiang says. “And all those ideas stayed the same. The only thing that really evolved was fitting into the technology box, trying to make sure that aesthetically it all worked, but then trying to figure out physically, how do we actually execute it?”

And with both Star Wars: Galactic Starcruiser and Star Wars: Galaxy’s Edge in simultaneous development, the design team could build in the full spectrum of Star Wars design experiences for guests who climb aboard the starcruiser and visit the exotic world of Batuu. “When we were working on Galaxy's Edge, we wanted to make a place that had a lot of history, so everything had a very tactile feel to it,” Chiang says. The starcruiser exists in contrast, even if the glamorous ship is 275 years old in-story. “We wanted it to feel very fresh and very new so that when you're experiencing the starcruiser, it's distinctly high end,” Chiang says. “You're involved in a unique experience there. And then when you arrive on Batuu, it's as if you're really visiting an exotic, ancient location.”

It’s that fusion of glamor and grit, ancient worlds and new technology, and the balance of power between the dark and the light, that makes the Halcyon starcruiser an unmistakable part of the Star Wars galaxy.

Read more Dispatches from the Halcyon:


Learn more about the design of Star Wars: Galactic Starcruiser in the latest installment of Dispatches from the Halcyon.